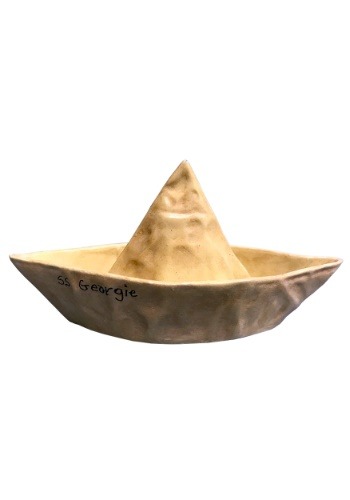 The Minute That Launched A Thousand Ships

The S.S. Georgie had a long maiden voyage, longer than Georgie could have ever guessed. The little paper and paraffin boat ended up lasting longer than Georgie's life had left. It was still floating along the sewer's flooded corridors when poor Bill Debrough learned that his little brother would never return from the flooded streets outside. While Georgie's terrible downfall was tragic, without it, his brother wouldn't have staged a rebellion against the entity that resided under Derry. Instead, Pennywise the Dancing Clown would have continued his disturbing horror show for hundreds of years to come.

This has been die cast out of metal and has been finished to look like hand-folded paper. The boat's side has SS Georgie printed in some hand-written looking text. It's just under four inches so it makes a great paper-weight or a classy Stephen King prop for your bookshelf. Officially licensed, this is a great piece for any IT fan!

Whether you have a collection of IT memorabilia or this is your only piece, the SS Georgie will look gorgeous in anyone's collection. Gift it to the Stephen King fan in your book club or keep it for when you want to consider one of the best beginnings in the history of horror fiction!