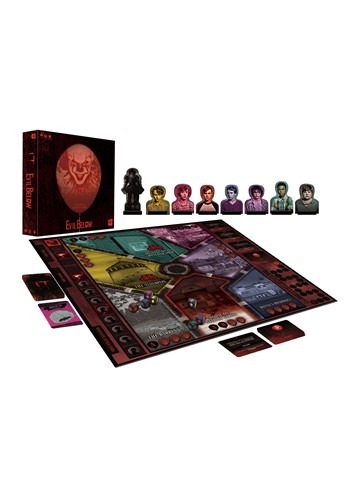 IT Evil Below Strategy Board Game

The image of red balloons has really changed ever since a certain clown decided to show up in the neighborhood. (That song about 99 of them is particularly scary, now.) Fortunately, the Losers Club is keeping an eye out for the rest of the kids and they've hatched a plan to stop Pennywise, hopefully for good!

Gather up as many of the Losers Club as you can to confront Pennywise in IT: Evil Below. This is an epic game of 2-7 players that can take upwards of an hour. Choose your favorite character and gain their special ability as you explore the 7 neighborhoods. Roll the colored dice to create your pool of actions. If any balloons show up, Pennywise moves through the city to capture kids and increase its power or even adds to its combat deck. Results of a Heart allow you to rescue snatched kiddos or restore bravery from the respective neighborhood. Results of a hand give you cards so you can go head to head with the demon clown. Gather two or more players together to launch an attack! Draw cards from your Fight Deck but beware any contributions Pennywise has made to it. Work together against the rising power of Pennywise because if any of the Losers Club die, you truly lose the game!

It is time again for the terror to rise and, this time, Pennywise has become especially interested in the Losers Club. Get ready to take your fate into your hands as you go head to head with the demon clown and face the Evil Below.