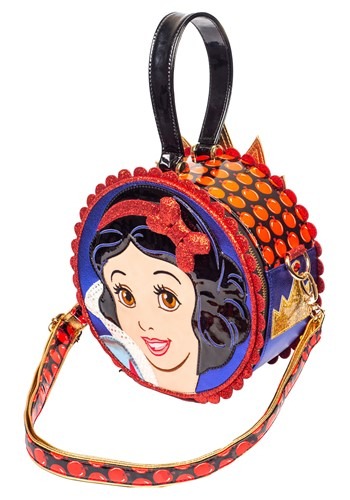 Princesses might have a habit of getting into enchanted pickles, but that doesn't mean they're helpless. After all, they always seem to be able to play ambassador to wildlife creatures. Snow White does it best. She flees from the castle after the woodsman's warning and winds up in a clearing. And while she wept for a bit, it wasn't long before she was whistling with the birds and singing to a blinking, long-legged fawn. That's a go-getter if we've ever seen one! Snow White might have been saved from a crystal coffin but until then, she was doing pretty well for herself. After all, she gained seven best friends and built a home for herself in one night after getting jilted from her royal place. Those big eyes are hiding some serious tenacity.

Are you ready to channel some serious fairy tale vibes? This cheerful purse will set you in the right direction. The unique drum shape features Snow White on one side and the evil queen on the other. In between is a rich pattern of apples on a black background. With a detachable shoulder strap as well as a small handle, this bag can be used in a variety of ways. Just remember to not take any fruit or tom-foolery from strangers!