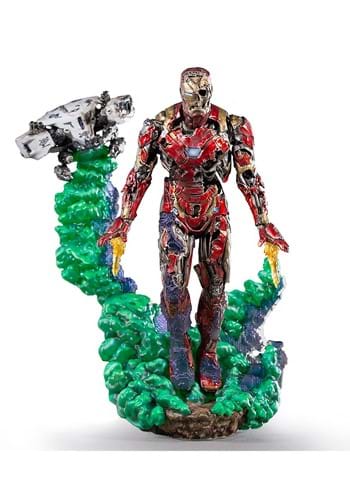 There are lots of different kinds of villains out there. Some people are really good at fighting you physically. They’ve spent years mastering a martial art, or perhaps they’re an expert sword fighter or gunslinger. Maybe they’re just a huge, strong alien or other type of creature. These types of bad guys are certainly scary, but we think there’s a worse kind. Villains who play with your mind or make you doubt your own senses are terrifying, in our opinion. Mysterio definitely falls into this category. Poor Peter doesn’t know what’s real or not as he’s trying to fight, and Beck doesn’t hesitate to use it against him. He constantly tries to make Peter doubt himself, and one of the most chilling moments is when he says “If you were good enough, maybe Tony would still be alive.”

Mysterio’s rendition of an undead Iron Man clawing his way up from the grave is a gruesome but still pretty awesome image. We see parts of what used to be Tony through shattered bits of the suit, but of course, it’s all just an illusion. However, this amazing Deluxe Art Scale 1/10 Statue Iron Man Illusion statue is not! It's made of polystone and hand painted so that all the details are just right. This is a fantastic piece to add to your collection if you’re a fan of Iron Man or Spider-Man. (Or maybe you’re even a fan of Mysterio. We won’t tell.)