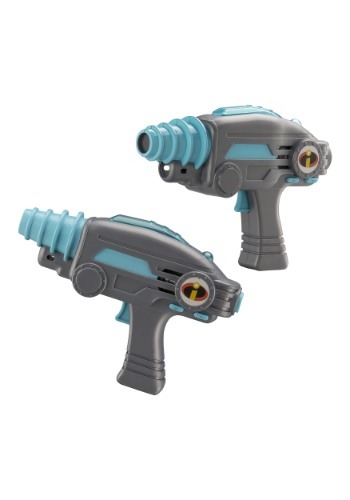 Jack Jack is too young to battle it out. But maybe if you check with Violet or Dash they'd take you on in a friendly laser tag battle with these officially licensed Disney/Pixar Incredibles laser tag blasters. Just make sure you let them know there are no powers. Uh, invisibility and force fields anyone? Yeah, we don't exactly know how we'd ever win against Violet if she used her powers! But hey, if you figure it out, do you think you could let us know the secret? Thanks!

Have an incredible game of laser tag with these officially licensed Disney/Pixar Incredibles laser tag blasters. You will have the ultimate battle with features like an infrared beam and hit sensor and the ability for shots to be detected from 180 degrees. Under ideal conditions, these blasters have up to a 100-foot range. There are 3 shooting modes and each setting has its own strengths and weaknesses in regards to damage, range and reload time. You can be sure that you won't die unexpectantly as there are 3 LED lights that let you know how many lives you have left. If you find yourself on your last life, perhaps you might choose to use the secret weapon button to fight a little longer. It may only be used once during the game. These blasters are expandable by adding additional units to extend play time. You will need 6 AA batteries to initial the ultimate game of laser tag. However, these do come with demo batteries as well. Lastly, these blasters are rated for ages 5+. So, be sure to keep them out of reach from your little Jack Jack. Who knows what would happen if they got ahold of a laser blaster...

No matter if you venture out to pursue a laser tag battle with Violet, Dash, or just your friend, you are sure to have a super duper blast. Just remember... no powers. Unless you, in fact, have some hidden secret superpowers... then unleash those and begin your reign and make your name.