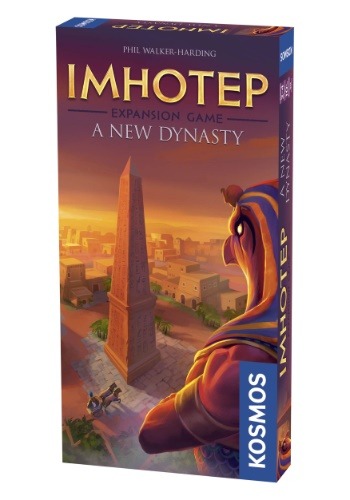 Is building Egyptian monuments getting a little too easy? Is procuring stones and transporting them becoming a piece of cake? Do you have no problem thwarting the plans of rival builders? Well then, it sounds like you've already played a TON of Imhotep. It might be time to add a layer of complexity to the game to keep things challenging. That's where this Imhotep: A New Dynasty Expansion Pack comes into play.

This expansion pack boasts a ton of new items to add to original Imhotep game. It comes with 5 new game boards, along with a handful of new cards. It also comes with new game pieces, including chariots and an Imhotep piece. It also comes with a whole plethora of new tokens needed to play with the new mechanics added to the game.

A New Dynasty adds plenty of new elements to the game. 5 new game boards can be added to the original, which gives you new ways to gain victory points. Each new board has multiple sides, each of which uses different new mechanics to help give you plenty of replayability. You'll be building burial chambers, racing chariots, and crafting an obelisk. If you want to add some replayability to your Imhotep game, then this expansion pack is exactly what you need!