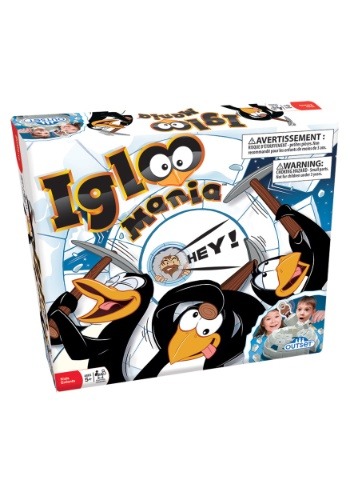 Parka Pete is one chill dude. He has to be since he lives in an Igloo in the middle of the Arctic! He’s taken his time to carefully craft each block of ice and stack it up to make his humble abode. There’s just one little problem. He seems to have built his home near some crazy penguins! Those pesky penguins keep trying to knock down his home. Can he stand his ground or will the penguins knock he down as they chip away at his newly constructed home?

When you play a game of Igloo, you get to take on the role of one of those pesky penguins! You’ll take turns using the toy ice picks to take an ice block from Parka Pete’s igloo. Make sure you don’t knock Parka Pete off the top of his igloo though. If you do, you have to take all of the knocked over ice blocks. The player with the least amount of ice blocks at the end of the game wins!

This game comes with a set of ice blocks, 4 penguin picks, a support dome, a sticker sheet, and instructions. It plays 2 to 4 players and is intended for ages 5 and older.