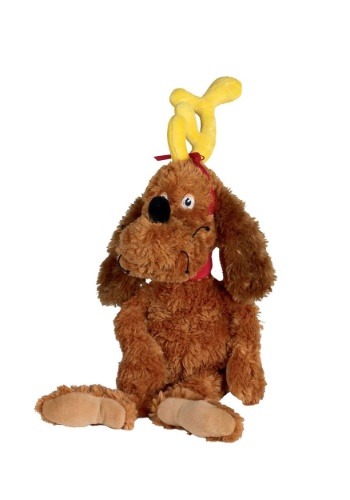 We're not like the Grinch; we don't want to steal Christmas— we just want to steal his dog! Max is such a loyal four-legged friend and he's very well-behaved. If we made our two tiny dogs climb Mount Crumpit every day, they wouldn't be very happy. They would probably be so unhappy, they'd run away and then we would be unhappy. Max, on the other hand, hightails it up Mount Crumpit without a woof or a growl like a good boy. Plus, he's an adorably scruffy little guy with long, floppy ears and a captivating smile. He's so adorable, we'd like to snatch him up just like the Grinch snatched up the Roast Beast— but we're not thieves and stealing isn't cool, not even stealing from the Grinch, so we'll go with the next best thing and get the Max plush. Now we can be like the Grinch and take Max with us everywhere we go! Our other little dogs won't be too happy about it but they'll get over it, eventually...

The officially licensed How the Grinch Stole Christmas Max plush is approximately 14-inches and filled with stuffing and pellets while an interior pellet-weighed bottom guarantees this plush can sit upright on tables and shelves.

Pick up the stuffed Grinch and set him next to Max for a cute Christmas decoration.