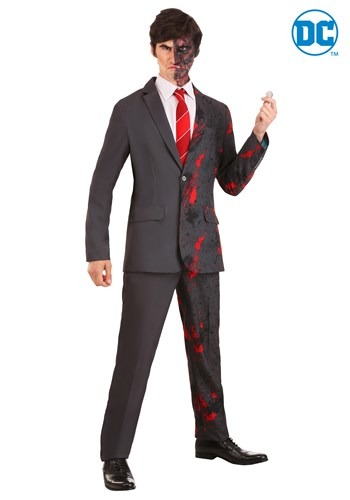 Harvey Dent is the visual embodiment of the duality of man. On one half, he's a justice-seeking district attorney, dedicated to the law. On the half, he's a man who's seen too much violence and chaos to be able to uphold the laws. His conflicted appearance perfectly represents the conflict brewing inside of him, and this Men's Harvey Dent Two-Face Suit Costume helps you step into the role of the classic Batman villain. It comes with everything you need to look that part!

This Harvey Dent Two-Face Suit Costume helps you transform into a Gotham City villain with ease. The outfit starts with a fully lined, grey suit jacket that has a 2-button closure in front. One side of the jacket has faux blood splatters and faux smudging to give it a rugged and worn look, befitting of the Batman villain. The false pockets add a touch of authenticity to the jacket. The pants match the suit jacket and fit with a front fly and button top. They also feature an elastic band in the waist to provide a comfortable fit. The suit comes with a striped tie as a finishing accent. Put it on and you'll be ready to scheme against Batman!