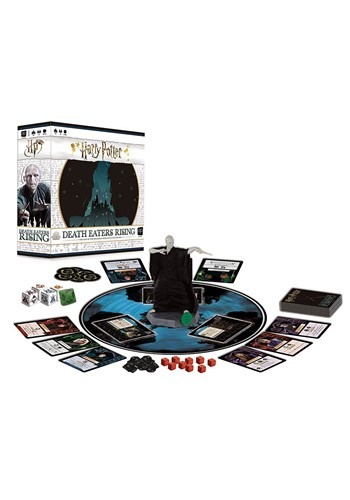 Save the Wizarding World

No matter how many times that He-Who-Must-Not-Be-Named is taken down, he always seems to have a few other practitioners of the Dark Arts who are ready to cause some trouble. But, as the Order of the Phoenix comes together, Mr. Where'd I Hide the Horcrux may have to work just a bit harder to win the Wizarding World. It's time to rise up and stop the Death Eaters as they come out of the shadows to claim the world for themselves!

Harry Potter and his buddies have been dealing with stuff way above their pay grade since the first year they stepped into Hogwarts. Why should year 5 be any different!? Well, this time they've got backup! Join the Order of the Phoenix, Dumbledore's Army, and the Professors of Hogwarts in a 2-4 player game of Harry Potter: Death Eaters Rising. This 45-90 minute game has each player leading one of the central groups directly against Voldemort and his evil wizards. Every round of play, a player will gather their die pool in an effort to either recruit characters and magical creatures from Harry Potter and the Order of the Phoenix. Before you get to cast your spells, Voldemort will decide to attack various key places like Diagon Alley or the Ministry of Magic. As he seeks to corrupt others and gather power. Stop enough of his Death Eaters and you may vanquish him before his dark magic spreads further!

Our heroic trio has gotten pretty used to dealing with terrifying things in the Wizarding World. But, when the Death Eaters rise, so too must all of their allies. Simulate some truly magical battles with your favorite characters and mystic moments from Harry Potter with this dice and card game!