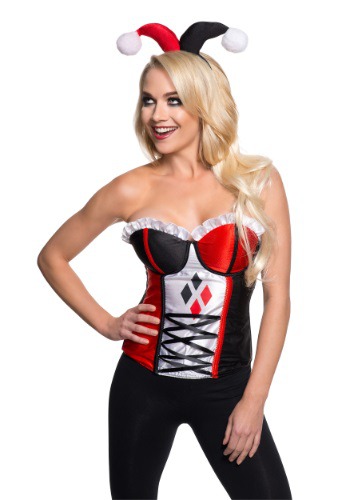 When you’re the right hand gal of one of the most notorious villains in the world, not to mention Gotham City, style is one thing that you know you have to master from day one.  Of course, an awesome kook like you isn’t going to be second in command for long!  Between some anti-hero antics… or is it anti-villain victories… a gal like Harley Quinn is bound to be known for way more than just hollering out a “Mr. J” every now and then!  That’s why your style needs to both be iconic and easily accessed.

So, when we saw that giant jester hat that Harlequinn was forced to stow in overhead compartment while going from Gotham to the Bat-Convention, we knew we had to act.  Relax and enjoy this officially licensed Harley Quinn Headband and fear no giant floppy hats ever more!  This comfy headband features a miniature version of the black and red jester hat – white puffballs included!  Be all the Harley Quinn you can be, now in travel size!