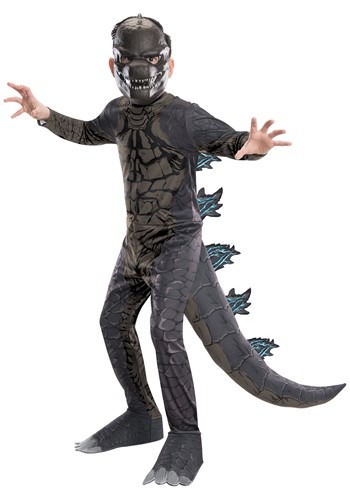 Oh, No! There Goes Tokyo!

He picks up a bus and throws it back down, as he wades through the buildings towards the center of town!

Godzilla is like a force of nature. No matter how many times we think that she's been defeated once and for all, she ends up coming back to wreck up the place! She smashes buildings, crushes public transportation, and does a number on power lines... and even the military can't seem to stop her. But hey, at least she keeps all of the OTHER monsters at bay. It'd be more than just Tokyo that would take a hit if we let Mothra or Rodan be King of the Monsters!

If your child is ready to step into the role of Godzilla, then look no further than this Godzilla King of the Monsters Costume for kids.

Does your child have the destructive capabilities of a 15 story tall lizard creature? Well, suit them up in this Godzilla costume! The officially licensed costume comes from the King of Monsters movie. It comes with a simple jumpsuit that has a scaly, lizard skin print on the exterior. The back of the suit has an attached tail with spikes along the back and the legs end in foot covers that fit over your child's favorite pair of shoes. Finally, the costume comes complete with a Godzilla mask. It's molded into the shape of Godzilla's face and it fits with an elastic strap around the back of the head. Once your child is all suited up... watch out! They may just want to rampage across the neighborhood!

Being Godzilla isn't just about smashing buildings and tearing up the cityscape! Once your child assumes the role of Godzilla, they'll be expected to battle against King Ghidorah for ultimate monster supremacy!