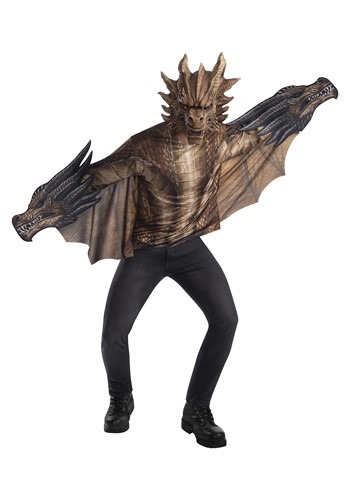 Can't Wait To Be King

Are you ready to fight in the battle of titans and claim the throne as King of the Monsters? Well, this Halloween will be the perfect time to dress up in this terrifying Godzilla: King of the Monsters Deluxe King Ghidorah Costume. This simple yet fantastic costume will have you looking like one of the most powerful beasts to ever walk the earth.

The mighty Ghidorah flys high above all the other kaiju. Sure, Mothra and Rodan are also up in the air zipping around but they don't hold a candle to this absolute powerhouse. Aside from the ability of flight and its sheer size, this titan has another advantage over the other monsters. As the saying goes, two heads are better than one. Well, this godly reptilian beast has THREE! That means three times the brainpower and the firepower.

This costume is designed with you in mind. We are quite aware that you don't have three heads. So we don't give you three Ghidora masks to wear. However, you do have two things that King Ghidora does not. You have arms! So, now those arms will become the necks of your two extra heads. Your own head will be hidden behind the mask molded to look just like Ghidora's ferocious face. With plenty of scales, horns, and teeth, you will look absolutely terrifying!

The sleeves of your Ghidora costume have fabric hanging from them that will act as your wings. Sadly, they aren't functional. But hey, that's what the imagination is for. Now, go out this Halloween dressed up as Ghidora. Find Godzilla. Defeat that overgrown lizard and claim the title of King for yourself!