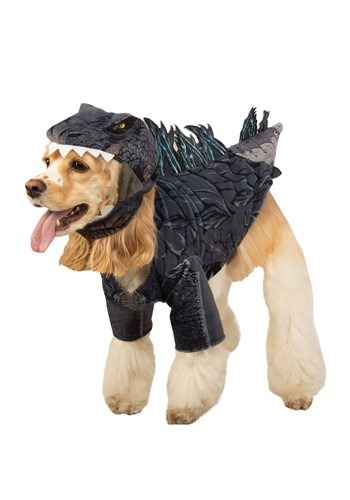 Your pup is one of the cutest creatures in the world, right? Well, how about for Halloween you turn him into one of the scariest monsters the world has ever known. We are, of course, talking about the mighty Godzilla!

This mighty titan was first introduced in 1954 and has been destroying cities and fighting other monstrous beings ever since. Sure, your pup can destroy his squeaky toys but we think it’s time you up his game. A Godzilla Dog Costume will make your doggo ready to terrorize the neighborhood this Halloween.

The costume is a simple two-piece. Start with the shirt. It is super soft, though the scaly design would make you think otherwise. Attached is a fiberfill stuffed tail as well as spikes that go along the spin of the costume. The headpiece is made to look like the King of the Monster’s face. It has faux teeth around the mouth and a pair of yellow reptilian eyes.

From the Depths of the Dog House

The kaiju king will rise again on the spookiest day of the year with the help of your furball and this costume. Just remember, don’t bring your pup near any buildings that you want to see standing the next morning.