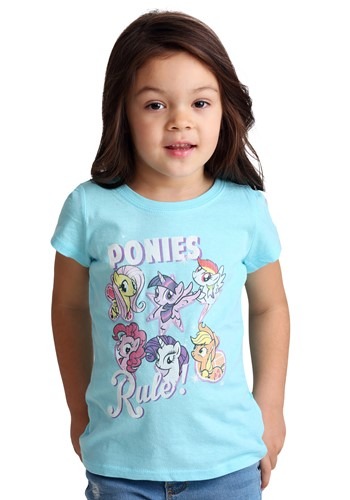 DON'T BE A NEIGHSAYER

The cartoon My Little Pony: Friendship is Magic, teaches toddlers many lessons on friendship and life. The star unicorn pony, Twilight Sparkle, gallops through the magical land of Equestria. She is sent by Princess Celestia to go to the land of Ponyville to learn more about friendship. On her journey, Twilight encounters other 5 other ponies including Rainbow Dash, Rarity, Applejack, Fluttershy, and Pinkie Pie! As the ponies grow up, they gain cutie marks on their flanks. These marks represent their calling in life. The pony pals teach us to build each other up and to be kind. Your pony-loving princess will be reminded to not be a "neighsayer" in her new  Girl's Toddler My Little Pony Ponies Rule T-Shirt!

Girls rule. In the land of Equestria, Ponies reign! This light blue tee-shirt features the message " Ponies Rule" in white and purple. Officially licensed graphics of the "Mane-six" are printed on the front of this polyester and cotton shirt. Twilight, Rainbow Dash, Rarity, Applejack, Fluttershy, and Pinkie Pie are all featured on this My Little Pony Ponies Rule T-Shirt.

Now she can bring her pony-pals wherever she gallops off too in her Toddler My Little Pony Ponies Rule T-Shirt.