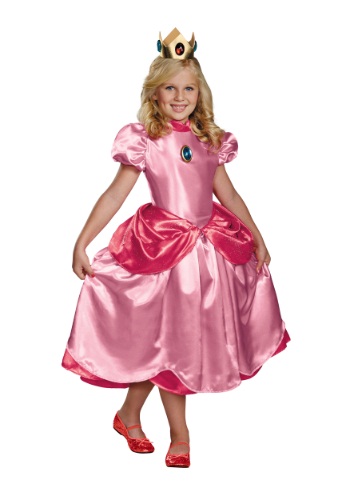 Princess Peach isn't new on the scene, nope, she's been around since the first Super Mario Bros. in 1985. But we've never seen a better version of her than your girl in this Princess Peach deluxe costume! Yes, with this signature style, she'll be able to rule the Mushroom Kingdom, pal around with brothers Mario and Luigi, and she'll probably save the day too!

You can set her up to have a great Halloween or play time adventure when you get her this Princess Peach costume. As a dress along with a petticoat and crown accessory, it has everything she needs to get the part. The dress and petticoat look just like the video game character's threads, and with pink and glitter accents it's cute and super fun too! It even comes with a plastic gem appliqued to the chest for the full Princess effect.

Complete the ensemble with the included crown headband, and she'll be ready to have all the Nintendo fun she can handle. With this costume, you can do your entire family in a Mario Bros family theme. When you bring the magic of these classic characters to life, you're sure to have all the Mushroom Kingdom fun your family can handle!