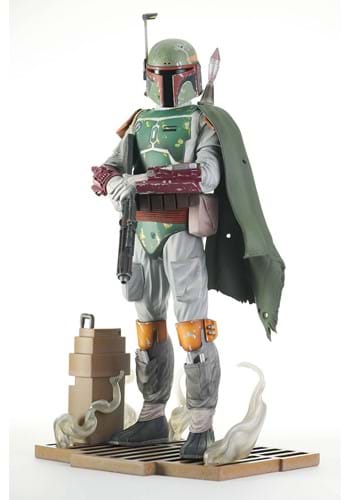 The End Or A New Beginning?

Just about any Star Wars fan can agree that the original trilogy is the best. It had the greatest story, the best heroes, and the most memorable villains. While he may not be considered a villain anymore, back in the original movies, Boba Fett was known as a cold-hearted bounty hunter. Not just any bounty hunter either, but the best in the galaxy! Now, you can celebrate this humble character's beginnings when you grab this epic Star Wars Return of the Jedi Boba Fett Figure.

We all remember the scene that this statue depicts. Jabba is preparing to feed Luke Skywalker to the Sarlacc Pit. Boba Fett stands by in case there's any trouble. Naturally, there is. Long story short, the poor bounty hunter ends up falling down into the tooth-filled crater himself while Luke goes on to free his friends. It isn't until decades later that we learn Boba survived the Sarlacc. Needless to say, we were all ecstatic to hear his story would finally be continuing!

A Bounty of Details

This statue features Boba Fett in his iconic green Mandalorian armor. He is standing in Jabba's throne room with his blaster ready to fire at the first sign of trouble. From the wear on his beskar armor to the holes and tears in his cape, not a single detail is missed. It will be like he used his jet pack to jump out of the movies and into your living room. Don't miss out on the chance to add this legendary bounty hunter to your collection today!