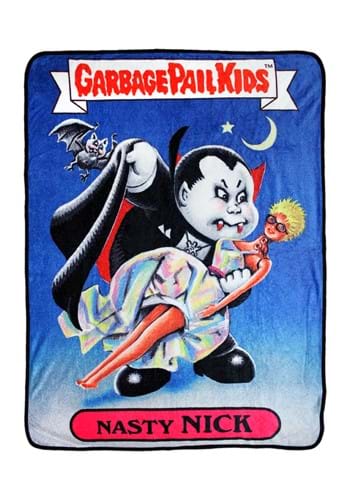 How nasty is Nick?

‘What a nasty Nick,’ they all say. But what is it that makes Nick Nasty? For starters, his taste for blood is a bit much and blood has such a foul smell. The company he keeps is pretty nasty too. Nick spends a lot of his time with bats and other juvenile delinquents. The Garbage Pail Kids are a rowdy, smelly, and loud bunch. Atom Bomb always seems to leave a mess behind him, and Schizo Fran, or is it Fran Fran, is always fighting with herself. Slobby Robby always leaves behind a mess, but it’s nothing compared to the smell of Nerdy Norm’s cigarettes. Honestly, now that we’ve looked at the Garbage Pail Kids collectively, maybe Nasty Nick he isn’t so nasty after all.

Nasty Nick is the original Garbage Pail Kid, and has made his way from cards and stickers to a super soft microfiber fleece blanket. The single-layer fleece blanket is made from 100% polyester. It depicts the original 1895 artwork of a bat flying over Nasty Nick, who is leaned over a doll. No knock offs here; the blanket is an officially licensed Funko’s Garbage Pail Kids item. “What a nasty Nick,” they may say!  Well, he’s not as nasty as the reset!