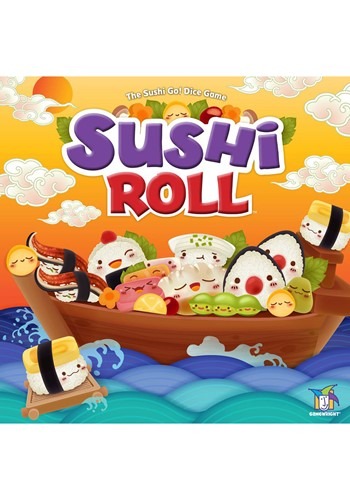 Get Out the Wasabi!

We can't get enough maki rolls. In fact, the local sushi restaurant has had to cut us off more than once. But that's why we love the Sushi Go! games, since they give us our sushi roll fix even when we can't make it to our favorite sushi bar. The latest game, Sushi Roll by Gamewright, puts a brand new spin on the classic gameplay.

Sushi Roll is a dice drafting game that takes its notes from the original Sushi Go! games. Instead of picking cards and passing them along, you roll the dice, choose one lucky sushi roll that comes up on the die, and send your sushi around the table. Your opponents will be doing the same, so by the end of the round, you'll end up with a whole smorgasbord of sushi. The game has plenty of strategies you can use, like grabbing the wasabi to double up on points or going after desserts to score some serious points at the end of the game.

The game itself comes with tons of tokens, 30 dice, conveyor belt playing boards, personal playing boards, and more. It plays 2 to 5 players and is intended for ages 8 and older.