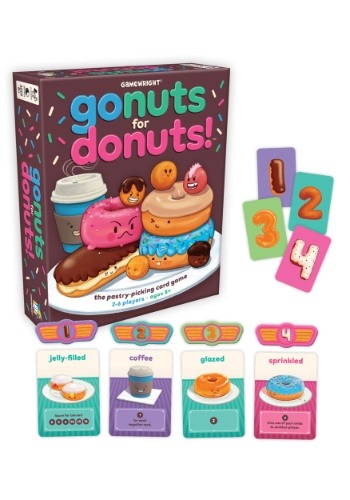 Go Nuts for Donuts! The Pastry-Picking Card Game by Gamewright

It’s a universal feeling. When someone brings in a box of donuts, everyone lines up to get their donut and the panic sets in. Each person is eyeing up the one they want, desperately hoping that no one grabs it before it’s their turn at the donut box. Beads of sweat accumulate as the person ahead of you slowly reaches for the jelly-filled one that you had preselected for yourself. Inside, you scream in terror, but then you breathe a sigh of relief. Their hand quickly changes direction and grabs the giant, glazed donut sitting in the corner. Finally, you make it to the box and triumphantly grab your donut of choice!

Well, playing this delightful Gamewright game captures that entire experience in fun a card game that both kids and adults can enjoy. Go Nuts for Donuts: The Pastry Picking Card Game comes with everything you need to begin gathering the tastiest donuts. It comes with two decks of cards, row makers, and a rules book. The game is designed for 2 to 6 players and is intended for ages 8 and up.

Gameplay is pretty simple. Donut cards will be assigned a number and then each player secretly selects one of their number cards. Everyone reveals them at the same time. If you picked a donut that no one else wanted, you get to claim it for yourself. If you chose one that someone else wanted, then you’re both out of luck and no one gets it! Collect special donuts to rack up points by the end of the game!