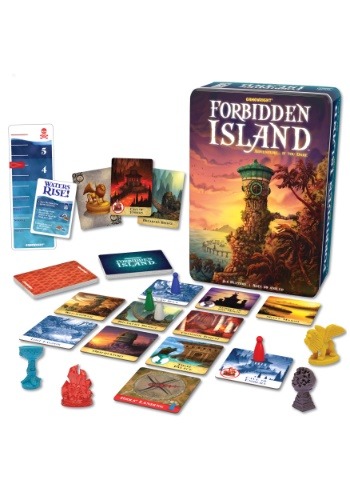 A RACE AGAINST TIME

You know how folks will ask you what you would bring to a deserted island? Well, we suspect that they don't usually follow that question up with letting you know that your island paradise is about to sink, do they!?

When you're on an island that is hiding a secret, buried treasure, you better make sure that you've brought the right things to help you unearth the mysteries and escape before the whole thing goes the way of Atlantis!

Such is the adventure that awaits 2-4 players in Forbidden Island, a strategy game where you must work together to locate the hidden elemental fragments while the very land you search begins to dip below the ocean waves. Shuffle the 24 island tiles and create a diamond-shaped isle and then place the elemental treasures throughout. As you play, cards will dictate the events that happen on the island, including the disastrous Flood Deck that shows how fast everything is going under. Each of 6 Adventurer Cards give a player unique skills to help them survive and locate the treasures as you move, shore up the isle, and escape to Fools' Landing before it is too late!

Play out your own island adventure when you and your friends race against the game, itself, to recover ancient treasures and escape before the Forbidden Island sinks below the waves forever... or at least until the second game!