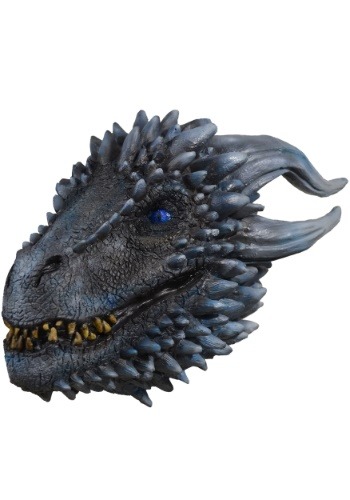 YOU KNEW IT WAS COMING

A really well-told story drops a few hints about what may soon be coming and eager audiences are always going to pick up those clues and go crazy with speculation.  So, of course, when you've got a bunch of frosty zombies that can raise the dead to join their ranks and then you come upon a defeated dragon... well, clearly things are going to get deadly!

Still, who expected a blast of brilliant blue flames to come from Dany's defeated "white dragon," Viserion?  So pretty... so deadly.

Get a little closer to the draconic wight with this Game of Thrones White Walker Dragon Mask.  This full latex mask features the darkly corrupted look of Viserion's once lighter scales and bright horns faded to a pale horror.  The shimmering blue eyes are both enchanting and frightening.  The sharp teeth, long horns, and scale ridges give this mask a real dragon feel.  Creepy blue fire breath not included.

GET TO KNOW VISERION

When you've waited so long to get to see the dragons in Game of Thrones go from eggs to babes to real forces of destruction, it might be a real tragic hit to watch one go the way of the Night King.  But, with this White Walker Dragon Mask, you can have a bit more time with Viserion before the Night King unleashes him again!