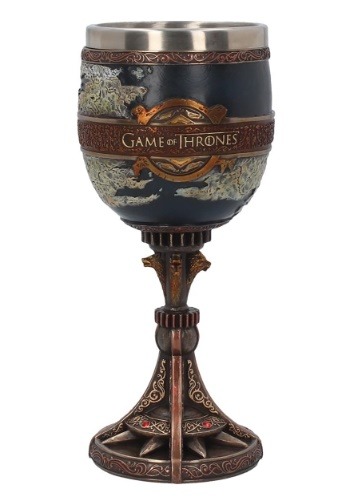 Let's face it, you're nobody in Westeros without a really nice goblet. We really think people are underestimating the power of wine and charm—stop fighting, start drinking!

If you're on board with our plan, then raise a goblet—this Game of Thrones The Seven Kingdoms Map Goblet, in fact—to a new era of rule: yours. Because let's face it, this is a goblet fit for a king. And it's easier to overtake your rivals and claim the throne when they are all drunk. Game of Thrones fans, gear up for a night of adventure with a mugful of Arbor Gold or spend a or a quiet evening plotting your next move as you sip a Strongwine from Dorne. It's anyone's game here, and this goblet definitely says: It's my move.

This is an exquisitely crafted, officially licensed cup that features a detailed map of Westeros, along with stunning details, such as four animal heads—a stag, a wolf, a lion, and a dragon—and a gorgeous base. It says "Game of Thrones" along the side and features a steel cup inside.

Remember what Cercei said: when you play the game of thrones, you win or you die. We suggest trying to win. But we're old-fashioned like that. This goblet is made for winners, so pick one up and try your luck in the most brutal struggle of power and pride we've ever seen.