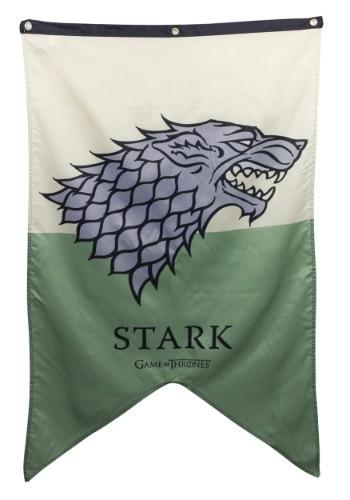 Includes & Highlights
Item #CHSFGXSTA
Items Included
Product Highlights
Size Chart
ST
Inches
Centimeters
Product Description
Okay, straight up, we're sick of the Boltons. We thought flaying people was bad enough, but when this Ramsey character took over as Warden of the North, things got decidedly, decidedly worse. So, we are going to take a stand. Any king who would raise a Bolton to be Lord Paramount of the North is no king of ours. So, say it with us, we know no king but the King in the North whose name is Stark.

Does that work for you? If you feel the same way, then make sure you have this HBO officially licensed banner to hang in your fan cave. It will firmly show that you're behind Jon, Sansa, Arya, and Bran as they work to restore their family's place in Winterfell. It's printed with the family sigil, the gray wolf, along with the name Stark and a Game of Thrones logo on a two tone, twin pointed flag. Hang this signature banner in your favorite spot to show off your favorite show, and you'll be able to show your allegiance to this great house. Pro tip: it looks particularly great hanging from a castle rampart!