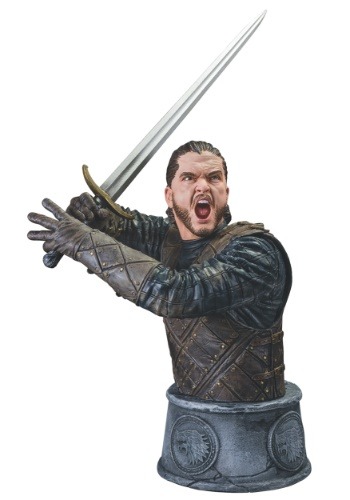 Game of Thrones Jon Snow Battle of the Bastards Bust

The Battle of the Bastards

So, let's talk about the Battle of the Bastards! Be honest, how many times have you watched it? Thrice? 5 times? A dozen? Well, honestly, it doesn't matter how many times you've watched the epic episode of Game of Thrones, we're sure you remember all the thrilling action beat by beat. So, the only thing to do next is to commemorate its legacy with some cool collectibles. And our choice to achieve that? This Game of Thrones Jon Snow Battle of the Bastards Bust!

This Jon Snow Bust Statue is an HBO officially licensed collectible from Dark Horse Comics. Molded and painted with an incredible amount of detail, it perfectly portrays actor Kit Harrington as Jon Snow ready to face off against the Bolton army, just like the scene from the hit Game of Thrones television series. Worthy of display in any fan's collection, this bust is about 9 inches tall (including the sword extension) and is made of durable molded polyresin. Limited edition, it comes with deluxe packaging and a certificate of authenticity.

We're fans, too, just like you. And, as it happens, Game of Thrones is one of the most popular shows worldwide! Be sure to get this limited edition collectible while it available, and while you're here, you might as well check out the rest of our wide selection of Game of Thrones items. When it comes to gifts from the Seven Kingdoms, we've got you covered!