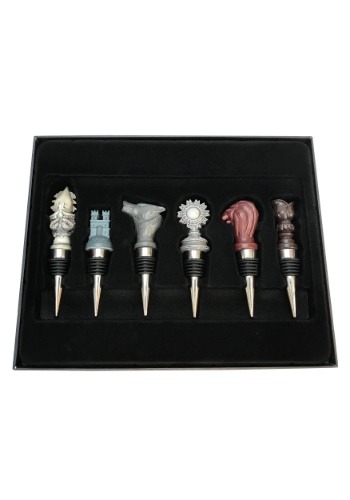 You Drink and Know Things

No plot scheming is ever complete without opening a bottle of wine. Are you getting together with a couple of friends to punish your pal who's so obsessed with his new video game that none of you have seen him in months? The schemes you guys come up with aren't going to get interesting until you've sunk at least one bottle's battleship. That's when the true dark, creative nature of your friend group comes to fruition. Maybe your friend group is a little like the Tyrell's and you'll plan to take their apartment by "glitter-bombing" them. Or if you're a Targaryen you just might slip fire-breathing reptiles into their mailbox... not super realistic but that's what happens when you're inspired by vino!

These gorgeously carved wine stoppers are perfect packages in a beautifully illustrated box. It's the perfect gift for Game of Thrones fans. Each head looks like a map marker so that people's scheming plans will level up instantly!

Mark your bottle with a stopper that proclaims exactly what house you're from. Wear your Lannister pride on your sleeve after you open that Westerland wine or keep that sparkling cider from the North fresh with the Stark sigil. Celebrate this amazing series with a wine stopper selection that'll have people raising their goblets to the memories of all eight seasons of Game of Thrones!