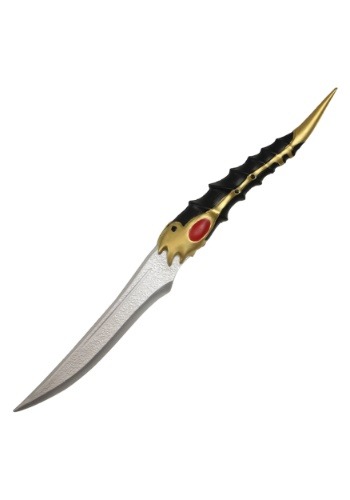 THE TRUTH OF A BLADE

The epic tale told in A Game of Thrones is one of constant deceit, machinations, double-crossing, and back-stabbing.  Of course, sometimes those are front-stabbings.  And, occasionally, failed-stabbings.  But, one attempted attack would practically set the countryside on fire!

It all comes down to who really owned the blade held by the assassin after Bran, after all.  An intricate and unique dagger and an assassin who hardly knew the details of what was going on.  Such a mysterious clue to the great game!

See if you can solve the mystery by getting your hands on this rarest of Game of Thrones weapons, the Catspaw Foam Blade.  Now, those with a careful eye would note that it is made of Valyrian Steel with a dragonbone hilt.  We're pretty sure that this one is made of hard and carefully carved foam and plastic, but nobody has actually seen either Valyrian Steel or dragon bones, so who knows!?

It's pretty deadly to go after the Iron Throne.  A ton of folks are constantly striving to claim it for their own and there have been more than a couple folks gone missing over the whole thing.  Perhaps it is better to start simple.  Claim this Catspaw Foam Blade and begin with an easier throne to claim and work your way up!