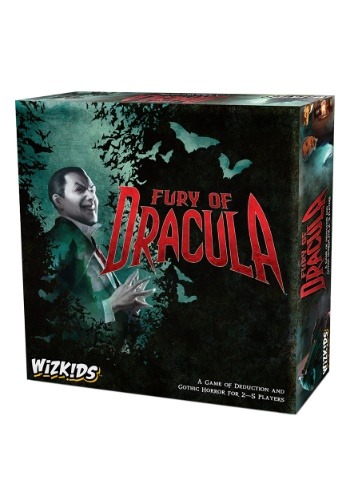 It is early Europe. Whispers of a dread threat are everywhere. Could it be true? Are vampires out there, preying upon the cities? What can be done to save the innocents from this most terrifying supernatural monster!?

Of course, the other side of the story is that of the Count. He's just trying to expand his influence and take a nice little vacation around the countries that border his realm. Is there anything wrong with making new immortal friends!?

Discover the adventure of the Fury of Dracula! In this 2-5 player game, hunters unite and explore the whole of early Europe, looking for signs of the master of the vampires. Through several day and night phases, hunters will choose to move through locations, investigate cities, and acquire hunter allies or helpful tools. Through investigations, they try to spot where Dracula has been and destroy his minions before they grow too strong. But, then comes the dead of night. Here, one player is Dracula. This player uses hidden cards to determine where Dracula is and where he'll move, laying traps behind to bring ruin to the hunters while creating new vampires and hoping they survive to maturity. If they do, Dracula's influence expands and his victory comes even faster! The game gets even more in-depth with optional rules like lair actions and further special powers for both vampire and hunter alike.

Initially, we all know that vampires are going to cause us a ton of problems. But, just look into those mesmerizing eyes. Who can deny the charm of that Dracula guy!? In the Fury of Dracula, find out if the hunters find and end the threat of Dracula for good or if the future be claimed by the influence of the infamous vampire!