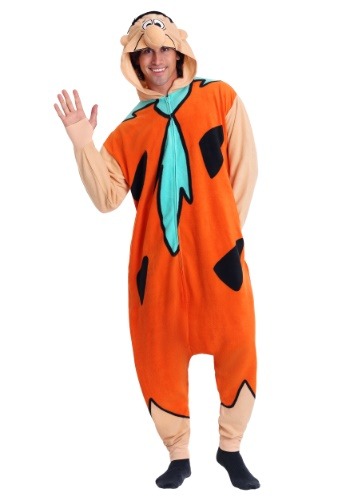 Ready to have a Yabba Dabba Doo time? Actually, come to think of it, we're not sure what that means! No one really explained what that meant exactly during the run of the Hanna-Barbera cartoon series. Is it the feeling you get when driving your caveman car on the open road? Is it the feeling you get when you operate the bronto-crane at work? Maybe it's the way you feel when you head to a meeting for the Loyal Order of the Water Buffaloes! Well, whatever the exact definition of having a Yabba Dabba Doo time is, we're pretty sure you'll be doing exactly that when you wear this Fred Flintstone Kigurumi for adults.

This Fred Flintstone pajama suit is a Japanese-style kigurumi! That means that it's not only ultra-cozy, but it also doubles as a quick and easy cosplay outfit for your next costume party. It's made out of a fleece material that's almost too soft to believe. The bright orange color scheme recreates the look of Fred's prehistoric tunic from the show and it even has a light blue tie around the neck. The suit fits with a simple zipper in the front, so it's easy to suit up in this outfit. Of course, the best part about this pajama suit is the hood, which is designed to look like Fred Flintstone's head. It has a plush nose and a part of cartoon eyes attached to the top for added detail!