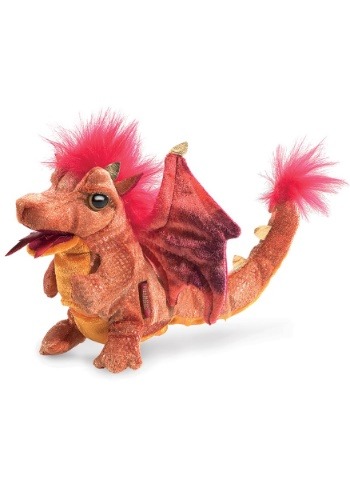 Meet Manny. He’s a happenin' little fire dragon from The Hidden Mountain. He’s not quite like other dragons. You see, he’s not interested in stealing gold from dwarves. He’s also not too keen on kidnapping princesses. He doesn’t even want to burn down the countryside like some of those other naughty dragons! Nope, the only thing Manny wants is to do is make some new friends. There’s just one little problem.

Everyone is scared of him! Wouldn’t you know it, all those other mean dragons have given dragonkind a bad rap, so now it’s awfully hard for Manny to meet some kind and gentle people to be his friend. Maybe you can help little Manny. Perhaps if you introduced him to some kind-hearted kids at your next puppet show, he could make a few new friends that wouldn’t be afraid of him!

This Folkmanis Fire Dragon Puppet measures 6 inches tall and he’s ready to become the new star of your puppet show. He’s soft-sculpted and comes with some stylish pink hair on the top of his head. He also has a pair of wings on his back and a red fabric “flame” coming out of his mouth. Your hand fits in a small compartment underneath him, so you can control his movements as you tell his tale.

Once you show Manny the Dragon to his new friends, we bet he’ll be one happy dragon. You'll be the little guy's hero!