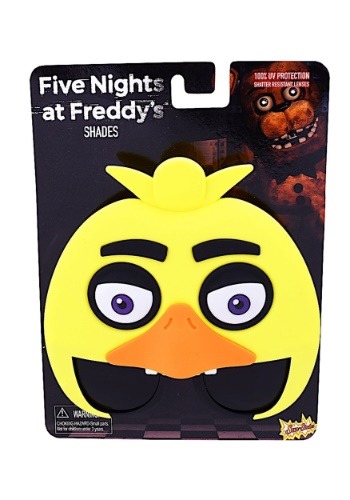 Fun means a lot of different things to a lot of different people. Some people enjoy rainbows and unicorns. Other people like to wear a shirt from their favorite movie. And others? Well, they just want to scare the pants off of their friends by dressing up like a killer anthropomorphic chicken. We get it. These Chica sunglasses are for that last type of person on the list!

You see, Chica is one frightening chicken. She hails from the video game series, Five Nights at Freddy’s, which is about animatronic critters who come to life in the middle of the night to murder the living. You haven’t experienced true fear until you’ve had a giant robot chicken come charging at you in a dimly lit hallway…

Anyways, these Chica sunglasses are officially licensed from the Five Nights at Freddy’s series. The front of the sunglasses looks like Chica’s horrifying face. It has the orange beak, dead eyes that look like a gateway to the underworld and a cute little tuft of “hair” on top. The lenses are tinted black.

Just slip these things on your head and you might just feel like roaming around an abandoned pizza parlor during your spare time.