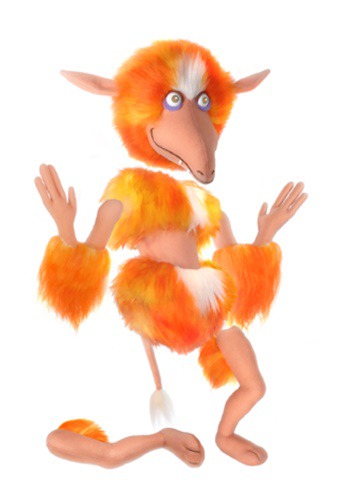 So, you think you can dance? Well, we bet that all your body parts are attached to your body! Now, in the epic movie, The Labyrinth, we meet the characters the called the Fireys. These feathery characters might be great at dancing but they sure are creepy! They've got great accents and they aren't shy about taking off their heads and juggling their body parts. There aren't many rules but there is one, don't punt anyone else's head but your own.

This might be one of the oddest plush toys that you'll ever own. This fella has got the sharp facial features and skinny limbs of the bright Jim Henson puppet creations. This Firey has bright feathery accents on his arms, waist, and head. It'll be a hilarious accent to your unique décor with detached body parts and purple and orange eyes. So, it's time to chilly down with the fire gang now that you've got a Firey of your own!