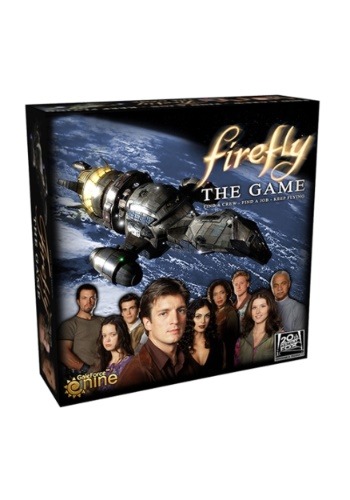 Firefly Board Game: The Game

It has been over 15 years since the series was claimed by the Reavers. Are you among the many who still long to see Serenity's engines glow bright and ensure Mal was right when he claimed nobody could take away the sky? Well, get ready to let loose some serious mischief, take on missions, and earn your freedom (and some cash)!

It is time to have some good gorram fun with Firefly: the Game. This epic game can take 2-4 hours and plays 1-5 players. Here, each player gains a ship and hires characters from the series as crewmates and visits iconic planets and other locations to take on missions, upgrade their ship, and avoid confrontation with the Alliance or the dangerous Reavers. Each character has various skills and abilities to help you make skill tests to avoid trouble or get paid! Make sure you pay your crew (and don't force a moral character to take on questionable missions) or they can get disgruntled and you risk losing them to an opponent... but that's nothing compared to getting caught by the Alliance with contraband on the ship! Each player has their own card that states their win condition, so do what you can to earn cash and achieve your goals while encountering all sorts of events that will remind you why you loved the show in the first place.

There are plenty of choices you can make to accomplish your win conditions in Firefly: the Game, but... let's be honest. It's really all about getting River on your crew, isn't it!? Return to Joss Whedon's epic space western and claim the sky!