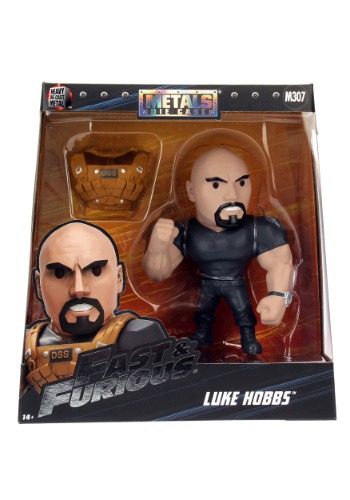 We already had a few Fast and Furious movies under our belts when we got introduced to a brand new character. But, he was a pretty big deal. And a total superstar. Yep, it was the one, the only, The Rock.

As Luke Hobbs in Fast Five, we meet him trying to capture Brian and Dom as outlaws. And, oh boy, does he bring the action! If you're all about that movie and the subsequent sequels, well, then you probably wouldn't mind collecting a little Fast and Furious gear. And you're definitely going to want something that features Hobbs!

Look no further than this Jada Toys Fast and Furious Luke Hobbs metals figure. This 6 inch figure is real die-cast metal and it's styled to look just like him. We think that's going to make it the perfect collectible!

From Jada Toys, this Metals figure is officially licensed from The Fast and Furious franchise. The figure stands 6 inches tall and is made of real die-cast metal. It also comes with a vinyl tactical vest that the figure can wear if you so choose. Set him up on your desk and you're going to have one tough cop ready to save the day!