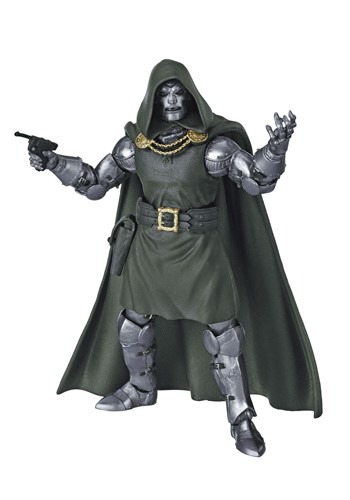 Doctor Doom has been the bane of the Fantastic Four since 1962. Well, he's been the bane of the entire Marvel universe for years! Sometimes, he plays the role of the tyrannical villain. Other times, he's just an arrogant and misunderstood leader taking his plans too far. He's even been portrayed as the hero in recent Marvel stories. There's one thing that's consistent about Doom. Everything he does, he does big... and he's usually a thorn in Reed Richard's side! That's why you ought to use all caps when you spell the man's name!

Of course, we love Doctor Doom, which is why we're excited to get our hands on this Fantastic Four Marvel Legends Doctor Doom Action Figure!

The collectible figure recreates the villain in all of his glory! He's clad in his green tunic, along with his power armor. He features plenty of points of articulation, so you can pose him in as many menacing poses as you can think of! He even comes with various different hands and faces to help you customize his look. You can add him to your collection, or pose him next to Reed Richards for the final battle against the Fantastic Four.