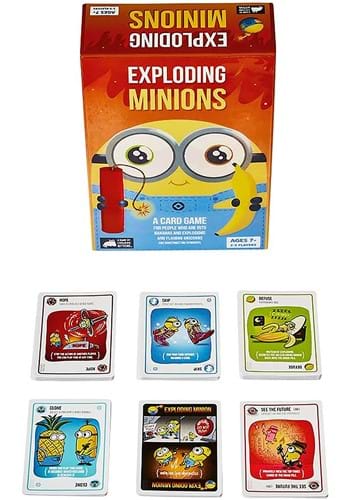 From Kittens to Minions

The makers of Exploding Kittens have gone too far! They've transformed the popular card game about felines with an affinity for explosive behavior into a card game featuring your favorite yellow henchman from the Despicable Me movies. This game comes with a deck of cards. Each card has art and gameplay inspired by the films!

Playing the game is simple! You take turns drawing cards with all of the other players. Draw an Exploding Minion card and you're out of the game. Other cards that you draw can help you narrowly avoid being kicked out, or skip your turn to lessen your chance of drawing an exploding Minion! This version of the game even introduces a new "Clone" mechanic that adds a new way to play the classic game. It's great for veterans of Exploding Kittens who want a little something extra to the gameplay or anyone who loves Stuart, Bob, and the rest of the crew!