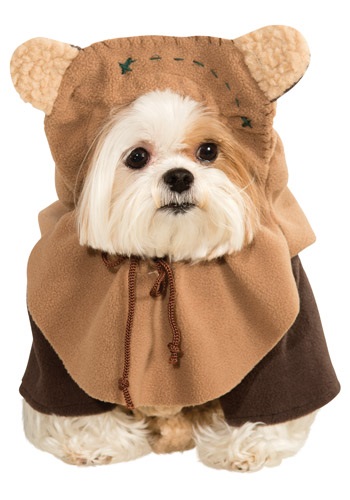 Have you seen Star Wars: Return of the Jedi? Well, let’s do a little recap of what happens in that movie. An elite army of technologically advanced Stormtroopers attempt to guard a shield generator station against a band of furry teddy bear creatures named Ewoks who use sticks and rocks as weapons. It should be a landslide victory for the Empire, but what happens? Those little critters defeat the greatest military force that the world has ever known! How, you might be asking yourself? Well, it’s obvious. Stormtroopers have a weakness to extreme adorability!

Well, perhaps it’s time to put some kind of anti-Empire emergency plan in place. You know, for that slim chance that a legion of Stormtroopers shows up on your doorstep looking for a fight! Just dress your puppy up in this Ewok pet costume. It’s based on the creatures from the Star Wars film, so any Stormtroopers who happen to be in your area of the galaxy will be rendered helpless by your dog’s extreme cuteness!