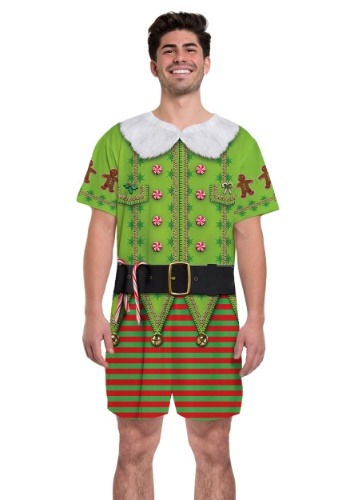 You might be wondering what Pepper Minstix is... Well, that is the name of elf who is Head of Elf Security up at the North Pole. He has the ultimate job of watching out for Santa Claus and Mrs. Claus. Pepper likes to wear outfits like that of military and patrols around Santa's village. He even wears makeshift armor made out of kitchen pots and pans. He has a one-of-the-kind machine gun... and it fires gumballs. We strongly recommend that you do not mess with this elf!

Now, even the fiercest, most official elves need comfy lounge clothes, too! This elf Christmas men's romper is perfect for Pepper to get a good nights sleep so that he can do his absolute best job protecting Santa Claus and Mrs. Claus and to make sure no mischief comes of the village.

Pepper Minstix told us that this men's elf Christmas romper is a-okay for him and that all of Santa's other elves would be sure to love it as well. This romper is made of 100% polyester with a zipper closure and a screen print elf design.

What? Shinny Upatree? Yep! That is the name of the oldest resident to call Santa's Village their home. He is even older than Santa! He is about the height of your average preschooler, skinny and extra wrinkled like that apple you should've thrown out 2 weeks ago. He has a rough appearance and is often cranky and Pepper said that Shinny would even love this romper. Although, we're still not sure how they will hem it to fit a 4-year-old sized elf. But they've got magic for that.