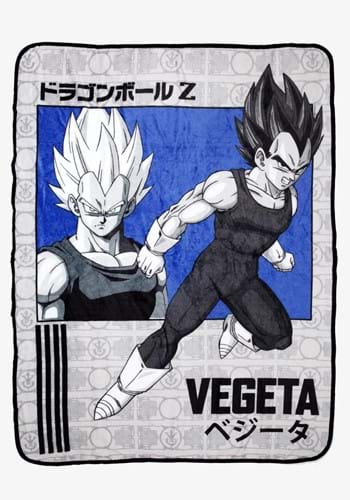 Vegeta never gets cold. If he even catches a hint of a chilly draft, he'll dodge it with ease. Then, he'd beat the cold into submission with an array of flying fists and energy blasts. Then, he gives a lengthy and arrogant speech about how his pride of a warrior could never be in jeopardy by an enemy as weak as Earthly winter weather. He's the Prince of Saiyans, after all, and he's not about to let the winter defeat him!

Unfortunately, we can't all be Vegeta (as much as we might try). Some of us normal, not-fighter humans get chilly from time to time. We need a little something to help us keep warm. The good news is that you can borrow the power of Vegeta to fight off the cold!

This Dragon Ball Z Vegeta Blanket is an officially licensed throw blanket made out of ultra-soft polyester fleece material. It features two images of Vegeta on the front, including one of him going Super Saiyan. It also has his name printed on the bottom in English and in Kanji symbols. Just toss it over you when you hunker down for an anime marathon, and Vegeta will do his best to keep you warm!