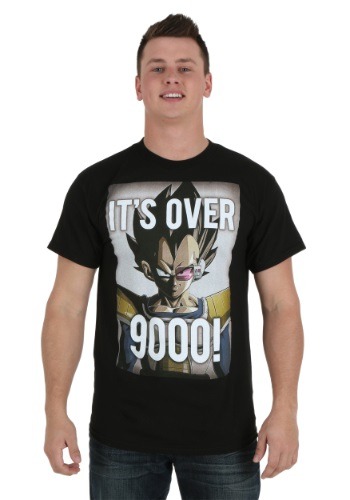 Includes & Highlights
Item #RPDZAS2148
Items Included
Product Highlights
Size Chart
SMLXL2X3X4X5X
Inches
Centimeters
Product Description
Does Vegeta think scouters grow on trees? You can't just go around smashing technology every time it shows you a number you don't like. Frieza doesn't just "take it out of your paycheck" either. His answer to most forms of disobedience is a Death Beam to the face. So naturally, this shirt has Vegeta on the front, about to make the mistake of smashing his scouter.

Anddd of course it also has "It's over 9000!" printed on the front, so both Vegeta and yourself will be able to show off how big of a deal that really is. It's basically only something Dragonball Z fans will understand, so be sure to get this shirt to show off that, yes, it is over 9000.