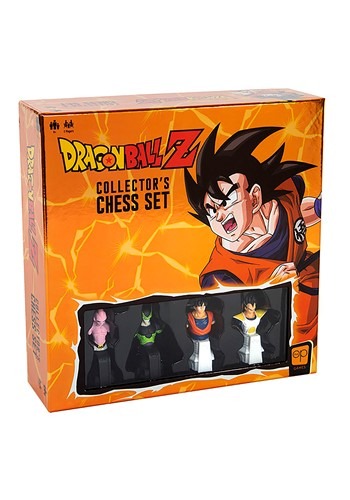 Did you ever wonder how announcers would actually describe what was happening in the midst of a powerful fight between the Z-Fighters and the terrifying enemies that threaten Universe 7? With all the flying, zooming, and Instant Transmissions going on, it would be pretty tough. Now, they could depend on chess moves to help explain things, but even that would require a bit of getting used to. Fortunately, now there's a way for you to achieve your dreams of DBZ fame!

Teleport yourself right into the action with this officially licensed Dragon Ball Z Collector's Chess game! The game is just about the same as the famous strategy that you already love. But, now you'll be transported to an alien world and watched over by the mighty Dragons, themselves! The pawns are replaced by Z-Fighters and Aliens and your favorite DBZ characters fill the classic roles of King, Queen, Bishop, Knight, and Rook. Play a game to see who can defeat the ultimate warriors in the universe. Just remember to call out your ultimate maneuvers, too!

Queen of the Saiyans?

We're not sure how Vegeta would handle realizing that he was the designated Queen of this DBZ Collector's Chess game. Of course, hearing folks describe how he is the most powerful piece on the board would probably help!