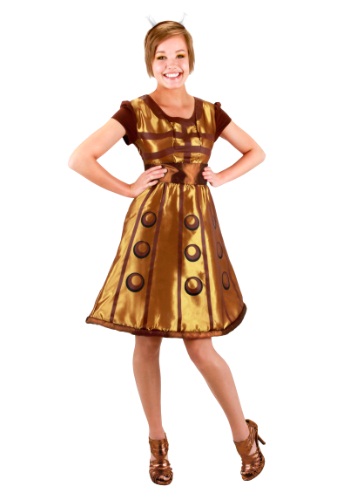 Doctor Who Dalek Dress for Women

If you had to choose an enemy of earth what is the scariest thing you can think of? Well, a lot of people might think of a giant wave scenario or maybe an asteroid hitting the earth. That would be bad, sure. But what is a scary natural force compared to the horrendous image of an alien octopus without a conscience encased in an indestructible shell? Yeah, it's enough to scare the Doctor himself. A meteor will only take out all of earth's inhabitants but the Daleks won't stop until they have control over the universe.

Becoming that alien octopus in an indestructible shell wouldn't be so bad though. We think the relentless, "Exterminate, exterminate" has a charming ring to it. The tech and organic hybrid makes for an interesting lifestyle. You'd have to announce yourself everywhere you go. But slow and steady tank wheels would take you anywhere you gelatinous tentacled heart desired, the golden arm of your strong suit blasting through locked doors and solid walls. Huh, who would have known how much fun it can be to take over the world! No wonder so many aliens try it in the Doctor Who franchise!

You'll be ready to embark upon the seizure of your earthly domain when you're rocking this metallic Dalek costume. This dress is quite mod with a fitted bodice and a skirt that swings out into a hoop at the hem. The headband has two stuffed metallic knobs to represent to lights on the aggressive alien life form's head. In this costume, there will be no doubt. Who runs the world? Daleks!