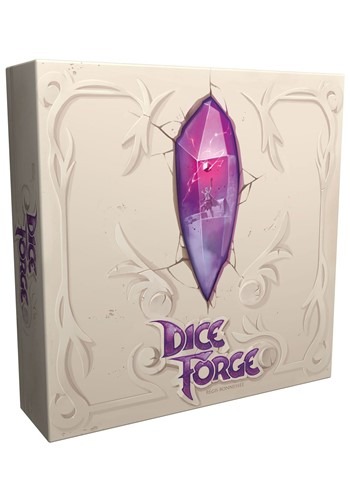 The Ancient Greeks kind of had it pretty good. (In some ways.) When they wanted something, they could take a quick pilgrimage to the nearest temple of the gods and offer up a sacrifice and prayer to their favorite of the pantheon. Roll the die and hope the gods grant you their favor! If the offering was accepted—zap!—some lightning or magical creature would appear and deliver a boon of appreciation. If you needed more, some ominous voice would let you know!

It's time to not only take that roll but see if you can't improve your odds. Welcome to Dice Forge. Gather up to 4 players for this 45-minute game where you basically bribe the Olympian gods to grant you favor. Do so by traveling to mystic sky islands and offering gold and celestial shards to gain friends, defeat monsters, and earn victory points. How do you do that? Well, that is the real fun. Each player has two dice with removable faces. Each turn, you'll roll a "divine blessing" (both dice) and sometimes a "lesser blessing" (one die) to determine what resources you acquire. Spend your gold to purchase new die faces and pop them right out and replace it. "Forge" new dice with better faces, higher rewards, or even curse your opponents with faces that give you rewards instead! Each time you play, you'll have different faces for the dice and new cards populating the locations for an ever-changing game.

Calling up the gods and asking for favors can be a risky thing. But, when you can give yourself an edge with the Olympian deities... or even bring their scorn upon your opponents... you have the ability to reforge the very dice you're rolling and pave your path to Mount Olympus!