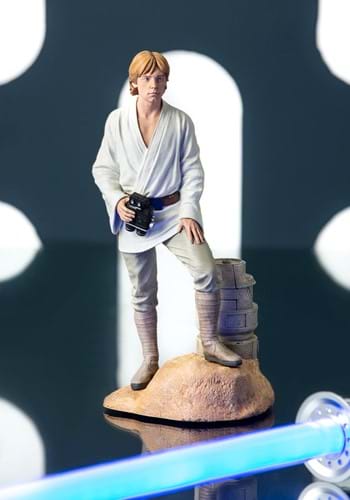 A young Luke Skywalker looks on the setting suns of a scorching desert planet. As a lonely horn and strings erupt into the Force theme, he contemplates his future on Tatooine. He knows nothing of the adventure that awaits him. He knows nothing of the despair and heartache he must face. He knows nothing of his legacy and of the crushing destiny that's just around the corner. He doesn't even think about saving the galaxy or of trying to restore balance to The Force. He's just a farm boy with lofty dreams.

It might be one of the most awe-inspiring scenes from Star Wars: A New Hope. This Diamond Select statue captures that moment in vivid detail.

This Diamon Select Star Wars Luke Dreamer Statue is an officially licensed collectible that's made out of molded resin. The statue is 1/7 scale comes with intricate detail and realistic molds to give you a statue like no other. It has a vivid paint job, sand texturing on the base, and you can even his binoculars in his hands. It comes with a full-color box intended for display. The statue has a limited run of 3,000 pieces, making them highly collectible. Just one look at this figure will have John Williams' music playing in your head.