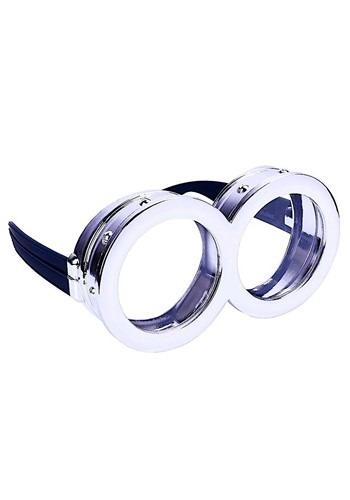 In the beginning, the Minions wore goggles made of coconut shells and banana leaves. When they served a powerful pharaoh, they opted for goggles made of leather with golden frames. As Minions of darkness, following the demands of a vampire, they chose a sleek, black band with stone-colored rims. Their passion and purpose in life may never change, but their look was always changing to keep up with the times. When they started working for Gru, they found a new and timeless combination of form, function, and fashion!

Stay as stylish as the Minions with your own set of Chrome Minion Goggles! The molded plastic glasses are designed to look just like the protective goggles the banana-loving goofballs wear while inventing new devices with Dr. Nefario. Instead of squeezing into an elastic-banded set of googles, the hinged ear-pieces make wearing this officially licensed accessory easy. Whether you’re playing dress-up like King Bob or leading a mob of Minions to a new leader like Kevin, you’ll feel as flashy as ever in the shiny, chrome-colored frames.

Whether you’re working for the world’s greatest villain-turned-father or you’re just hoping to make a convincing Minion for Halloween, be smart like Kevin and pick up a pair of these Despicable Me Chrome Minion Goggles!