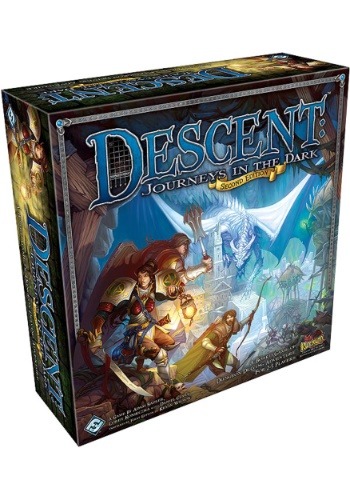 Descent Journeys in the Dark 2nd Edition Board Game

Everyone wants to be the hero! You know... that courageous young warrior who slays the dragon and rescues the kingdom from imminent doom, all while finding some shiny treasures along the way. The problem is, none of us are living in a fantasy novel, so most of us just have to settle for collecting a shiny paycheck from a pretty average job. The good news is that Descent: Journey In the Dark gives you the opportunity to travel to wondrous places, slay dangerous monsters, and find glittering magical trinkets.

This Descent Board Game is the second edition version of the game, which streamlines the original into more manageable experience. The simplified version makes gameplay smoother without sacrificing the strategic complexity of the original! You and up to 4 other players get to choose from one of many different characters, each with their own special abilities, stats, and action cards. As you play, your character will defeat monsters and gain experience, gaining access to new cards and weapons. You can play short scenarios or head on long campaigns that sprawl out in a choose-your-own-adventure style set up. This creates a highly customizable experience and provides hours of replay value. The game comes with everything you need to play, including tons of dice, map pieces, quest guides, chits, counters, and highly detailed figurines.

If you're looking for an in-depth tabletop roleplaying game with tons of hours of gameplay packed into it, then Descent is the game for you! It has plenty of hours quests inside this box and can be combined with various Descent expansions to keep the adventure going!