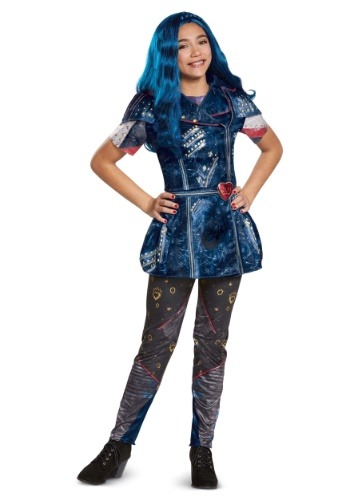 Evil By Name Only

When the evil queen named her daughter Evie, we're sure she thought her daughter would follow in her evil footsteps. But the blue-haired princess took to acting appropriate pretty easily when she transferred to Auradon prep. She rocks when it comes to science class and the social scene. And she pretty much cuts herself off from her evil background. Well, she does try to cheat with her magic mirror but it doesn't take long before she realizes that she's smart enough to leave her cheating ways behind. If your little girl looks up to this musical and fashion inclined character than this costume is a great solution for her next costumed event!

This outfit looks like it's straight off of the Isle of the Lost. It can be worn a few different ways with a t-shirt, an attached dark blue vest, and wild leggings. The t-shirt has a large red heart with a crown, hinting at Evie's personality. The blue vest is layered over the top with printed zippers and a textured background and faux leather sleeves. It can be secured on the side or worn open. The leggings are patterned with the heart and crown seen on the t-shirt, bringing the ensemble together in a way that Evie would approve of!

If your little girl heads out as Evie this Halloween, don't be surprised if you have a confident princess on your hands. Want to polish off this costume? Find Evie's blue wig so that people will recognize her look from far away. Does your kiddo want to join up with the rest of the descendants? You can find both Uma and Mal costumes in our catalog as well. While they might still behave better than their villainous parents, Halloween is sure to be magic!