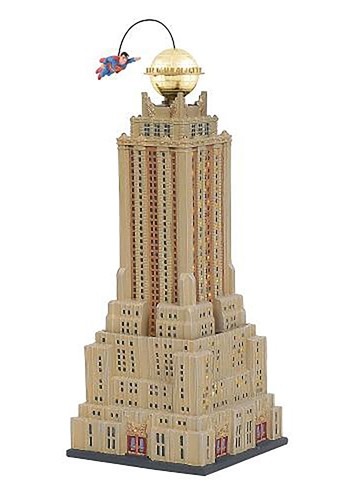 Superman vs. the Titan

Reports in the city of Metropolis are that a giant humanoid has appeared in front of the Daily Planet, the famous news media giant. It is unknown if this incredibly tall individual means harm to the city or the 42-story building. Fortunately, it appears that Superman has appeared on-site to deal with the potential disaster! Only time will tell whether this will be a conflict of epic proportions or the beginning of a long and beautiful friendship!

We have a sneaking suspicion that you are going to get along famously with this officially licensed Department 56 Daily Planet Statue. This porcelain statue stands nearly 18-inches tall and features detailed carvings to represent the iconic building where Clark Kent spends most of his days. LED lights keep the building alive while Superman is held aloft. Play out your DC dreams by capturing the Planet or giving it as a gift to your beloved!

Imagine starting off every day with a cheerful wave to your best buddy, Superman. While he's soaring down to get to work at your Department 56 Daily Planet statue, you get to be the gentle giant off to save your own world! (Just keep your fingers crossed that he shares some of that Kryptonian mojo!)