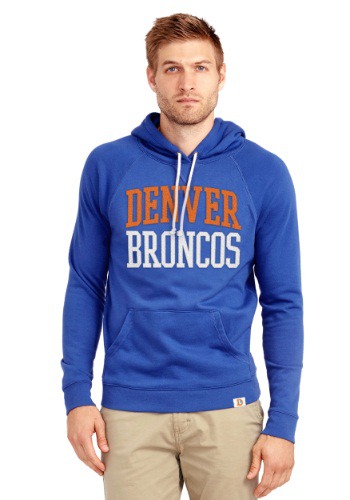 You’re a loyal Broncos fan, and you want everyone to know it. Your wardrobe would be IN-COM-PLETE without this officially licensed Denver Broncos hoodie. Yes, you harken back to the John Elway-Terrell Davis glory days and back-to-back Super Bowl wins, but you remain dedicated to your team nonetheless. Mile High Stadium (whether that’s the actual name anymore or not, you’ll continue to call it that) is your crib, having the claim to fame as being one of the NFL’s loudest stadiums. Your voice is definitely being heard.

And how many other teams have live animal mascots? Did you know Thunder is just his stage name? Wanna know the real-life names of the three horses who have portrayed Thunder? JB Kobask was Thunder Sr., Winter Solstyce was Thunder II––affectionately called Dos––and Me N My Shadow is Thunder III––affectionately called Tres. One or another of this trio of Arabians has even traveled to away Super Bowl appearances. A team of several lucky individuals accompanies Thunder on the field when he leads the team onto the field at home games to pick up any “trophies” Thunder graces the field with. You proud Broncos fan––wear this lucky hoodie as you cheer your team to their next trophy win.