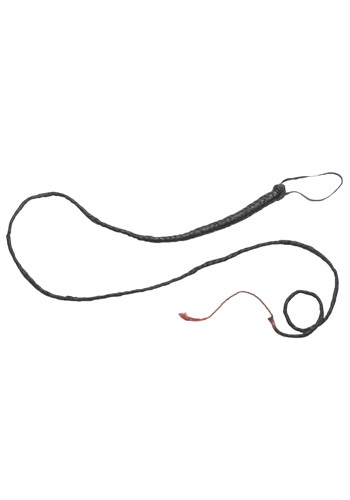 Honestly, who could make a whip look like such a sleek and cool weapon except for Zorro? Sure, we know he also had a sword and a hat, and a really, really cool horse...but something about the whip just proved a sight to behold. He could put out candles from the other end of the room with the whip! We’re not saying that you necessarily need to be able to do that, but if you pick up this Zorro Black Whip to accent your costume, you might also be able to pick up some of his inherent skill at the same time!

And trust us, Zorro is just about the best masked vigilante hero there is—so any amount of cool you can borrow from him would be pretty spectacular.

This whip is cracking with energy! Braided and black, this accessory measures about 6 feet long and features a handle with a wrist strap. You can roll it up and attach it to you side, or keep it coiled around you shoulder, or maybe there's even some other way of storing it for ready access...no matter what, it’ll definitely give people pause when they see it! It's a thing to behold.

A Word Of Warning

Whips, even toy whips, can really hurt. Practicing with them can be dangerous, so make sure you are safe and no one else is in harm’s way either! Zorro would never hurt an innocent bystander, so make sure you don’t either, even in play...because that’s decidedly not cool in Zorro's book.